ALCON – This event is May 10th. Wednesday May 10th.  There was a typo in the original message.

URGENT UOD UPDATE and REMINDER – For those wearing Parade Dress, the correct uniform is Parade Dress with white pants. EVERYONE must wear a saber belt (No Saber)  See photo we are looking to reproduce. Only CG sidemen will wear carry sabers. 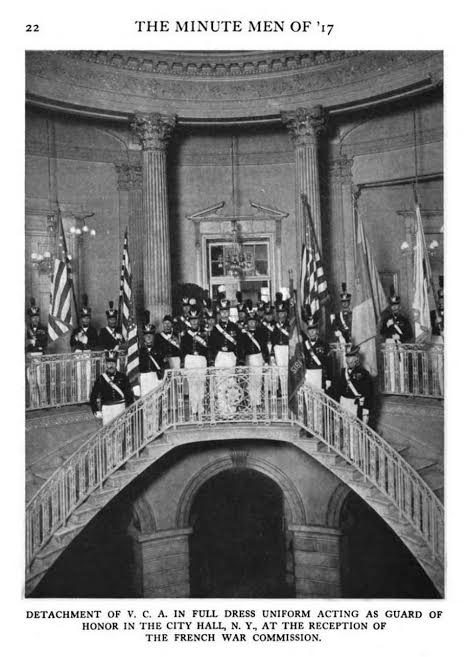 ALCON – Response is required NLT 14 April – Those members planning to attend will be treated to dinner and it is requested that all RSVP’s be submitted no later than April 14th in order to make reservations with the commissary section. Contact WO1 Dino Pofanti at dinopofanti@yahoo.com – Register at https://www.vcasny.org/?post_type=event&p=4056&preview=true

On Wednesday afternoon May 10th, 2017 at 1615hrs, the Veteran Corps of Artillery will muster  in full parade dress uniform on the steps of city hall in Manhattan to formally mark the 100th anniversary  of our unit serving as the official military escort to the French and British war commissions arrival in the United States just a few short weeks after America entered the first World War by declaring war on Germany and the axis powers on April 6th 1917.

We will be joined by a contingent of the Old Guard of the City of New York.

At 1630hrs we will take several unit photos to mark the occasion and re-create the attached photo from May 9th 1917 (see link below).

A commemorative VCA WW I medal will be awarded and issued to each participant arriving in full parade dress uniform. BG Lion will be in attendance to represent the French army and a British officer TBD will be representing the United Kingdom. A brief ceremony will be held in the NYC Council Chamber after the photos are completed. At the conclusion of the ceremony the Corps will retire for dinner at a nearby venue TBD.

VCA members on the retired/honorary staff are invited and encouraged to participate in parade dress if they are still in possession of the  said uniform, otherwise they are requested to attend in Corps Blazer tie with miniature decorations  so as to be included in the photos and follow on ceremony. Retired and honorary staff in good standing  that choose to attend in either parade dress of Corps blazer will also be awarded the commemorative VCA WW I medal .

Those members planning to attend will be treated to dinner and it is requested that all RSVP’s be submitted no later than April 14th in order to make reservations with the commissary section.

The VCA assisted by the OGCNY  served as the city’s military escort and guard of honor at the request of then Mayor John Purroy Mitchell.

We will also have WW I US Army Re-enactors present in the uniform worn the field by the VCA one hundred years ago.

I am requesting a maximum attendance effort, the  new photos will be inserted side by side in the 100th anniversary re-publication of the ‘Minute Men of 17″.

Registrations are closed for this event.