In December 2014 the VCASNY became a chapter of the United States Field Artillery Association,  the only chapter in New York City.

New York City celebrates the 50th Anniversary of the Verrazano-Narrows Bridge with a 50 round salute from Fort Hamilton and Fort Wadsworth. 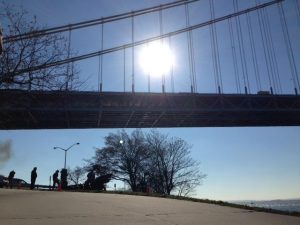 For the first time ever, in November, 2013, the VCASNY started each wave of the NYC Marathon with a cannon firing. 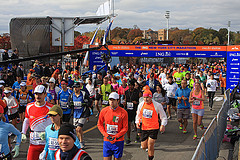 In October 2011, New York City and the National Park Service celebrate the 125th Anniversary of the Statue of Liberty. The VCASNY and the New York National Guard provide a firing battery and support.

On November 2, 2009 the Veteran Corps of Artillery participated in New York City’s official welcome for the newly constructed naval vessel, USS New York built with steel from the World Trade Center. During the welcoming, held near Ground Zero, the ship paused off Battery Park to fire a 21 gun salute, as it sailed up the Hudson River to the commissioning ceremony. 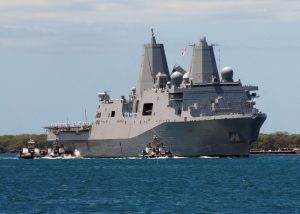 In October of 2008, the Corps helped plan and conduct the re-dedication for the 100th anniversary of the Prison Ship Martyrs’ Monument in Fort Greene Park, Brooklyn. In remembrance to the thousands of American soldiers and sailors held as prisoners of war who suffered and died on board the prison ships anchored off Brooklyn during the American Revolutionary War

On November 25, 2008 the VCA led the march of all United States military units through lower Manhattan for the 225th commemoration of Evacuation Day. 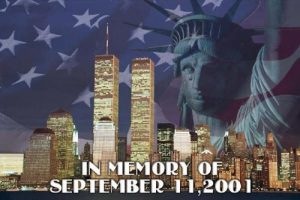 On July 3, 1999 The VCA firing battery welcomed an international naval flotilla, firing salutes from Fort Hamilton and the following day welcomed the tall ships review breaking with tradition by special request of the U.S. Army and fired its traditional July 4 50 round salute from Fort Hamilton in Brooklyn

On January 1, 1996 the VCA resumed its role as the honor guard to the Governor’s inauguration for the first time since the administrations of Governor Nelson Rockefeller.

On June 6, 1994 the VCASNY fired a 21 gun salute to commemorate the 50th anniversary of the D-Day landings in Normandy. The VCA conducted the ceremony on the Great Lawn in New York City’s Central Park.

The VCASNY Firing Battery conducted firing battery salutes from multiple locations in and around New York Harbor for the 100th anniversary celebration and re-dedication of the Statue of Liberty on July 4 1986.

The VCASNY acquired howitzers from the New York Army National Guard to be used once again for ceremonial firings. The VCA resumed firing the annual salute to the nation from the battery for the first time since 1890. 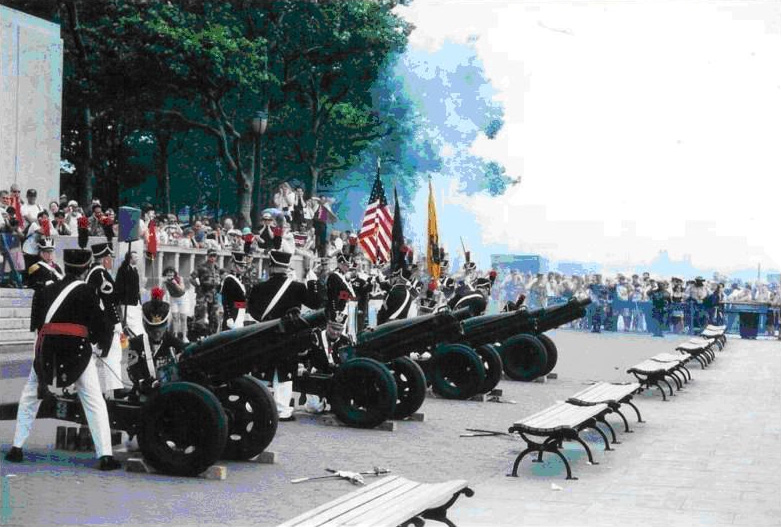 At the outbreak of America’s entry in World War II, The Veteran Corps Artillery was not called up as a unit, however large numbers of its members of military age enlisted and served in various branches of the U.S. Armed Forces and in all theaters of operations. 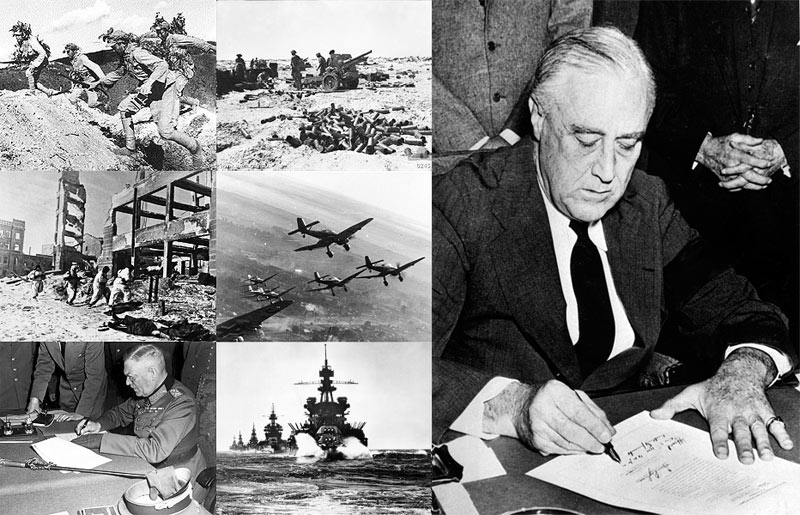 The Corps relocated its headquarters from the 71st Regiment Armory on Park Ave and East 33rd Street to its present location at the 7th Regiment Armory. 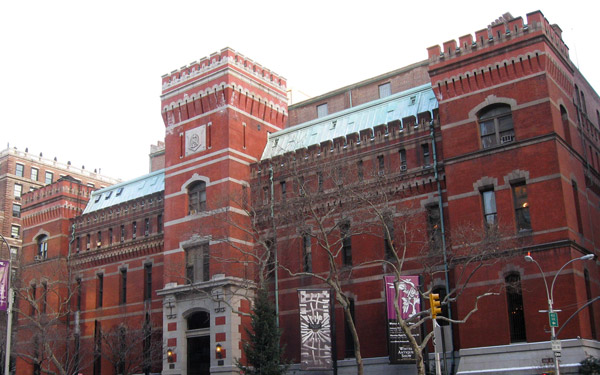 Three officers from the VCASNY traveled to both Britain and the front lines of France to study and translate (from French) the tactical field manual for Anti-Aircraft Artillery, later adopted as the manual for the U.S. Army.  While in France, one of those officers became the first American to be gassed during World War I.

Following America’s entry into World War I, The Veteran Corps of Artillery was called up for state active duty by the Governor to help guard the reservoirs in Upstate New York protecting the New York City water supply from sabotage. 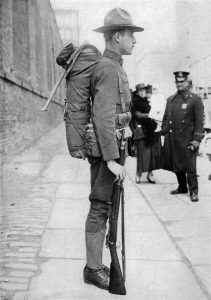 The Society of the War of 1812 was incorporated as a military society under the laws of the State of New York on January 8, 1892.

A “joint resolution” by the Congress of the United States incorporating the Society of the War of 1812 into an historic military command was approved on September 25, 1890.

The Veteran Corps of Artillery took part in restoring order during the New York Draft Riots, protecting the State Arsenal from being looted of its muskets and ammunition. 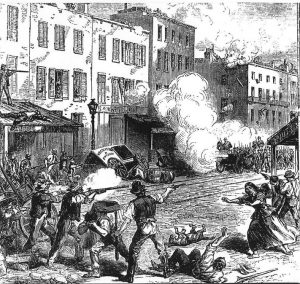 The Veteran Corps Artillery guarded the NY State Arsenal from attack during the Dead Rabbits Riot. The Society of the War of 1812 and the Veteran Corps of Artillery were consolidated on January 8, 1848.

The Military Society of the War of 1812 was established in the City of New York on January 3, 1826, as a military society composed exclusively by commissioned officers of that War: regular and volunteer.

During the official return and official state visit of Lafayette to America, the VCA was placed to the right of line a place of honor among other militia units of the state, for his official arrival in New York City.

The VCASNY volunteered and entered military service of the United States during the War of 1812.

The VCASNY was approved as a separate and distinct organization in the Militia of the State of New York by then Governor of the State George Clinton on March 8, 1791. 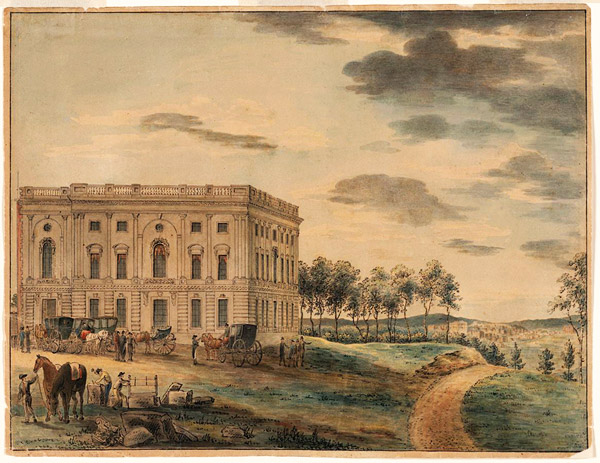 The VCASNY was organized on November 25, 1790, at the City Arms Tavern by officers and soldiers who served in the Continental Army during the American Revolution. “Upon the Organization of the Corps in 1790, the uniform of the Continental Corps of Artillery of the Revolution was adopted” 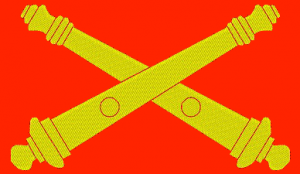